The continued delay in reviewing the land use Act had caused Nigeria to lose trillions of naira in foreign direct investments, according to Sir Rowland Abonta, Nigerian Institution of Estate Surveyors and Valuers (NIESV) president.

He stated that the NIESV had been engaging relevant stakeholders in order to initiate the process of reviewing the Act.

Speaking at the 2019 Mandatory Continuing Professional Development (MCPD) Seminar organised by the Abuja branch of the institution, Abonta noted that the present Land Use Act is undemocratic having been enacted through decree by a military administration.

He said, “The normal approach of every professional association is to set up advocacy to the government and the institution have done a lot of advocacies. Even to the National Assembly then, we made a presentation, and our recommendation was that the Land Use Act be removed from the constitution, and then it will become amenable to reviews’’.

Speaking on the theme ‘Redeeming the purpose of compensation from compulsory Acquisition in Nigeria’, Prof Victor Akujuru of the Department of Estate Management, River State University, called for the amendment of Land Use Act to reflect curent realities in compensation method.

He observed that the Land Use Act as currently constituted failed to provide compensation for land in the event of compulsory acquisition.

According to him, “The Land Use Act by its provisions specifies the replacement cost method of valuing building. It also specifies that we should use compensation rates to value economic crops and trees but does not provide any compensation for land.

“Now, the compensation you determine from replacement where are you going to build, a building that had been taken over, or does the law assume that once you have acquired a building compulsorily, the person should become a destitute.

“The truth of the matter is that the law needs to be amended so that people are compensated for the value of the land on which the building is standing, and then, market value should be used in assessing crops and economic trees, and in determining the compensation they pay for the buildings” he said.

We provide avenue for real estate professional  development by integrating principle into practice and bench marking on international best practices so as to ensure improved professional competence among real estate practitioners in Nigeria.

Our support available to help you 24 hours a day, seven days a week. 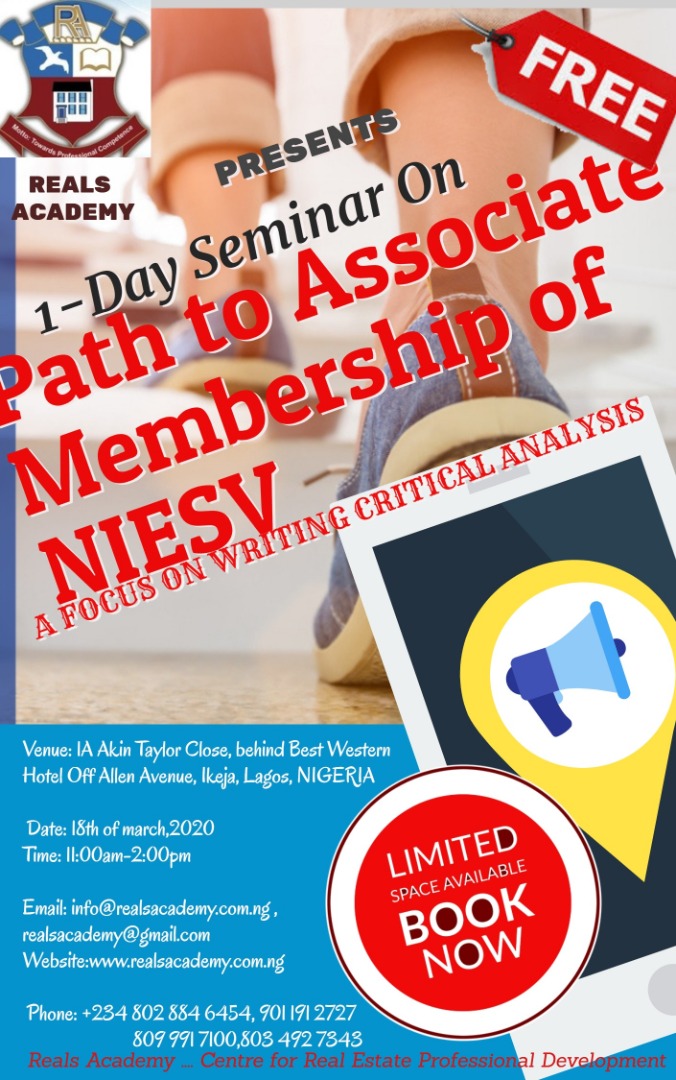 A 1-Day Seminar on "PATH TO ASSOCIATE MEMBERSHIP OF NIESV"

- A Focus on Writing Critical Analysis -

Keep It A Date